Raiders fans are some of the most passionate fans in sports. They’re a colorful group. Members of the Raider Nation cheer loudly and wear silver and black outfits, but some of the most devoted Raiders fans take their fandom a step further dressing up in eccentric and intimidating costumes on game day. Many die-hard fans, especially in the famous fan section of the Oakland Coliseum known as the Black Hole, have created alter egos for their characters.

Raiders Italia had the privilege to interview some of the most notorious Raiders fans. Today we are pleased to introduce you to Michael E. Villalobos, also known as Fire Wolf.

Raiders Italia: Who is Fire Wolf in the “real life”?

Michael E. Villalobos: An ex Volunteer Firefighter, now a scaffold builder by trade. I enjoy spending time with my family, but I’m content to staying at home and being lazy also lol. Football is my life and every year I look forward to seeing old friends and making new ones, both Raider fans and opposing teams fans

RI: How old are you, where do you live and what do you do for a living?

MEV: I’m 45 from Danbury, Texas and I’m a Scaffold Builder

RI: When did you start dressing up as Fire Wolf?

MEV: The first time I dressed up was on October 12, 2008 for a game against the New Orleans Saints

RI: How long does it take to become Fire Wolf?

MEV: It usually only takes me about 30 minutes to get dressed, wearing a mask makes things easier and faster since I don’t have to worry about face paint

RI: Given your strong passion for Raiders, did you ever have Fire Wolf take on Michael’s place in real life?

MEV: No, not really. In real life I’m content to keep to myself unlike the Fire Wolf who is a little more outgoing then me lol

RI: Can you explain what makes the Black Hole so special?

MEV: I would have to say it feels like family to me, although a dysfunctional family, but a family none the less 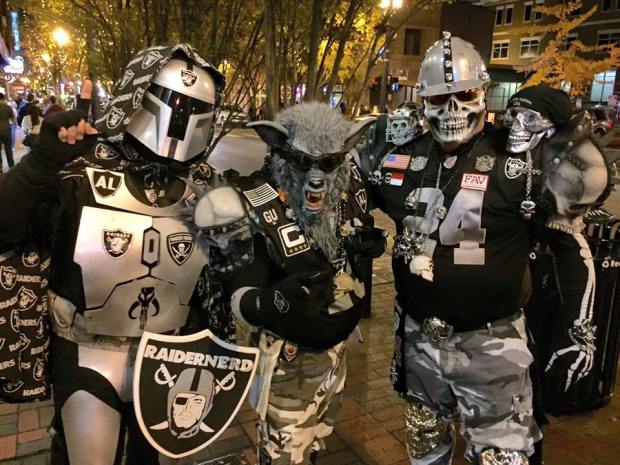 RI: Is there another fan base that can be considered at the same level of the Raider Nation?

MEV: As far as dedication goes the answer is no, but every fan base roots for their team just like me, except I dress up for the games lol

RI: With the team’s move to Las Vegas now official, will the Black Hole vanish?

MEV: I don’t believe it will vanish, but I don’t think the Black Hole will be the same as the one in Oakland

RI: What is your fondest Raiders-related memory?

MEV: I have 3 fond memories of the Raiders. The first one came at a game between the Los Angeles Raiders vs Houston Oilers. At the end of the game Tim Brown threw his towel in the stands and I was able to get it, and I wear it with my outfit now. The 2nd memory came on my first trip to Kansas City where I got the privilege to see Al Davis; although I didn’t get to meet him just seeing him in person was good enough for me. The 3rd memory happened last year in New Orleans when I got the privilege to meet Derek Carr, and get my jersey signed by him

RI: Who is your favorite player?

MEV: That is a question I can not answer since I pretty much love all the players for the Raiders both old and new

RI: What do your family and friends think of your passion?

MEV: They all think I’m crazy, cause I dress up for the games lol

RI: The Raiders have received approval from the National Football League to relocate the franchise from Oakland to Las Vegas. For the second time Oakland will lose their football team. We feel for the Oakland fans, we understand the emotional implications of this move, but looking at this from afar it seemed that the Raiders had no choice, that it was impossible to find a viable solution in Oakland. What’s your take on this?

MEV: In my heart the Raiders will always be a California team. I am both sad and happy with the move. Like I said I’m sad cause they moved, but I’m happy cause they will finally get a new stadium

RI: The team will play at least two more seasons in Oakland. Do you think that they will sell out every home game or the stands will be half empty?

MEV: I believe the loyalty of the Raider Nation will still attend games and sell out every home game

RI: After the move was approved in March, Mark Davis offered to refund Raiders fans if they felt they didn’t want to keep their season tickets. Are you a season ticket holder? If yes, did you apply for this refund? Do you know how many in the Black Hole have?

MEV: Being that I live in Texas I’m not a season ticket holder, and I honestly don’t know how many of my Raider family did

RI: Will you still be a fan of the Raiders?

MEV: I’m a Raider fan for life, I will follow my Raiders wherever they go

RI: Will you travel to Las Vegas?

MEV: Of course I will 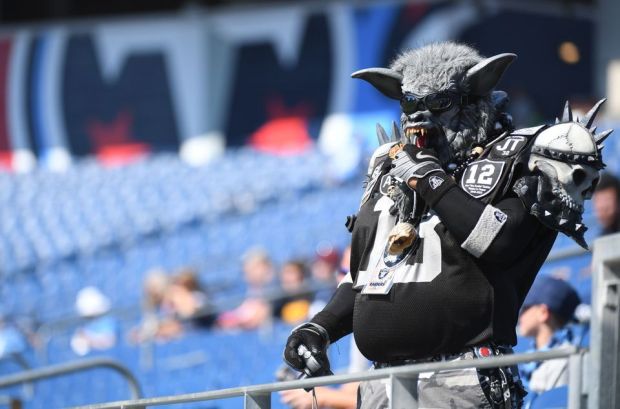 RI: Here in Italy there are often clashes between opposing fans, especially in soccer. Have you ever had any of these problems during Football matches?

MEV: I’ve had a few incidents where an opposing fan was drunk and wanted to act like an ass, but for the most part I have been shown respect from opposing fans

RI: Are you happy with McKenzie’s choices in the last Draft?

MEV: Yes I am, so far he has done an excellent job in both the Draft and Free Agency

RI: What are your expectations for the 2017 season? What can this team achieve?

MEV: The Super Bowl of course, and this team can achieve anything and everything they put their mind to

RI: What are, in your opinion, the strengths and weaknesses of the team? What are the remaining holes on the Raiders?

MEV: Our strength is our offense, our defense is a good one, but we could use some help in the secondary

RI: Marshawn Lynch came out of retirement to play for his hometown Raiders. what are your thoughts about this? Will the running game improve with him in the backfield?

MEV: I’m very excited about “Beast Mode” and I believe our running game will be one of the best in the NFL this year

RI: Is Jack Del Rio the coach who can lead the Raiders to a Super Bowl win?

MEV: Yes he is

One thought on “Raider Nation: interview with Michael E. Villalobos a.k.a. Fire Wolf”